The current First Vice-President of the Saskatchewan Archaeological Society is Maria Mampe. 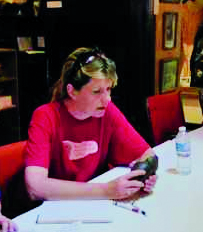 My name is Maria Mampe and although I have called Saskatoon home for the last 16 years, I spent my formative years in the Prince Albert area. I am a proud member of the John Smith Band (Muskoday First Nation). Following an intense and lifelong interest in archaeology, I completed a Master of Arts degree in 2013 with a focus on Plains Archaeology and, more specifically, the Wolf Willow site at Wanuskewin Heritage Park. I have been involved with the SAS since 2009, when I was privileged to receive the Zenon Pohorecky bursary. Following that, I was employed by the SAS as a field tech at South Branch House and I spent two amazing summers as a Program Supervisor in the Archaeocaravan program. I have served on the Board previously as a Member at Large/First Nations and Métis Liaison for three consecutive terms. Now that the mandatory two year hiatus from board membership has passed, I am honoured to be elected to the position of First Vice President.