NEW: 50 years of SAS publications are now available on flash drive or CD!!

Visit our Den of Antiquity to order your copy!

Interested in perusing back issues of the E-Voice? Check out our E-Voice archives here.

These can range from booklets such as:

To major books such as:

This series was first published in 2009 and will detail important archaeological research in Saskatchewan and the surrounding area. These papers will range from precontact to contact research, from professional to avocational summaries.  All of our publications are available from our online shop: Den of Antiquity. 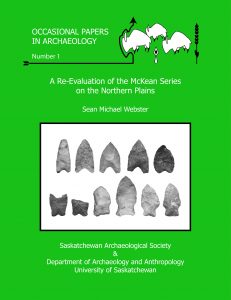 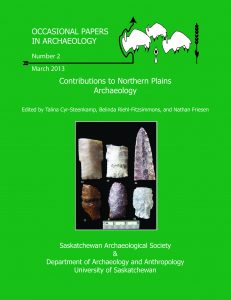 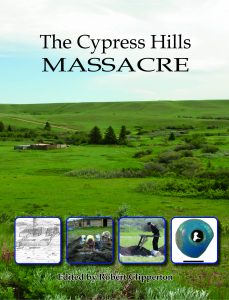 OPA #2 – Contributions to Northern Plains Archaeology edited by Talina Cyr-Steenkamp, Belinda Riehl-Fitzsimmons, and Nathan Friesen (2013) – OUT OF PRINT; Available as a Digital Download (PDF) in our Store.

“Truth is stranger than fiction and it is a little known fact that, less than one hundred years ago, an armed, though not official force from the United States, invaded Canadian territory and killed up to one hundred of her citizens…  This amazing and incredible story reads more like a lurid, wild-west tale from the imaginative pen of a fiction writer rather than sober fact.   For an affair of its size which took place in comparatively recent times it is remarkable how little is known of what actually happened.”     – George Shepherd (1967)

Sifting Through Time: A History of the Saskatchewan Archaeological Society edited by B. Riehl-Fitzsimmons, F. McDougall and T. Cyr-Steenkamp

Fifty years of history of our Society from its earliest beginnings in 1963 to its golden anniversary in 2013.

Long Ago Today is a book about Saskatchewan’s and western Canada’s earliest peoples and their lifestyles, and about the science of the human past – archaeology – which helps bring them to life today. However, this book is not a dusty account. It gives insight into this rich heritage in a unique and entertaining way. It presents:

Long Ago Today will help you experience, both through learning scientific facts and through your own imagination, the sights and smells and sounds, and even the emotions, of ancient events and human activities. It will give you new appreciation for the skills, talents, and intelligence of the peoples who first called this land “home” long, long ago.

Boulder Monuments of Saskatchewan by G. Ian Brace – OUT OF PRINT; Available as a Digital Download (PDF) in our Store.

Boulder Monuments of Saskatchewan discusses Saskatchewan’s 33 major such configurations, providing a classification of each according to themes and possible or known functions. Comparisons are made with similar sites throughout the Northern Plains, utilizing historical and ethnographic information in order to further our understanding of the motivations and purposes that may have stimulated the creation of these features. This study also discusses some of the many questions that need to be addressed through future research. The volume is illustrated with 134 line drawings, 10 black and white photographs, 16 colour photographs, and 11 tables.

As agricultural and other activities alter the face of the remaining native prairie, we are constantly losing surface archaeological sites – tipi rings, cairns, medicine wheel and effigy figures, and other boulder monuments. This book is meant to further the ongoing educational effort that needs to be carried out to preserve and protect these wonderful, unique and precious sites.

The Aboriginal Rock Painting of the Churchill River by Tim Jones

The Aboriginal Rock Paintings of the Churchill River is a second printing of the main published source on this subject. It illustrates and discusses the most durable and ancient art created by the ancestors of today’s Woodland Cree residents who lived along the Churchill River (“Missi Nipi” on the Saskatchewan side of the border and “Manteo Sipi” on the Manitoba side). The red ochre paintings are found on vertical cliff faces in 19 places on the Saskatchewan stretch of this long-used waterway, and in three locations on its Opachuanau Lake portion in Manitoba. They are some of the northwestern-most examples of the Northern Woodlands rock art tradition, which extends back in time at least 2000 years and in space from Quebec and Minnesota to northwestern Saskatchewan.

The book presents an environmental and cultural context for this unique art form as it is found throughout the northwest Canadian Shield’s Boreal Forest, and discusses what is currently known about the age, origins and meanings, based on historical, archaeological and ethnographic evidence. Virtually all of the known paintings are reproduced in this book. As well, 22 colour photographs show a sample of the paintings and their settings on the rock canvases provided by the Precambrian bedrock.

Spirit in the Rocks: Rock Paintings in Northern Saskatchewan on VHS or DVD

Spirit in the Rocks is a collaborative work between the producers, our sponsors, and the Northern (Woods) Cree people of the Province of Saskatchewan. This 59-minute film combines an acted re-creation of the creation of a rock painting site in the Canadian Shield Boreal Forest area of northern Saskatchewan with a documentary-style explanation of what we now know about the origins, meanings, and age of these ancient rock paintings (pictographs).

Information from historical, archaeological, and ethnographic sources is combined with interviews with Cree residents of the region to shed light on the striking, ochre-coloured images we find on vertical rock “canvases” next to the water in at least 70 locations along the waterways of Saskatchewan’s far north.

This film is intended to present this art tradition to a wider audience and by so doing, enlist the support of everyone to respect and protect these fragile and disappearing sites.

To order any of the above publications, you can fill out our PDF Den of Antiquity Order Form.

These publications are also available to purchase online through our online Den of Antiquity.

A booksellers’ discount is available, please inquire with our Business Administrator.