The Saskatchewan Archaeological Society has developed an exhibition, entitled Kiwetinohk: Rock Paintings of Northern Saskatchewan on the colourful and ancient rock paintings found on the cliffs along the Churchill River and other waterways of the Boreal Forest in northern Saskatchewan. This region holds 70 known sites out of approximately 700 that have been found on the bedrock cliffs of the Canadian Shield. Archaeological and ethnological evidence points to a primarily Algonkian-speakers authorship, and while the exact age of all individual sites has yet to be determined, a number are documented to be several hundred years old, possibly as old as 2000 years or more.

No such exhibition on the Canadian Shield rock art tradition has been available for touring before this. This exhibition is now ready for circulation. For information regarding exhibition characteristics, logistics click here for more information on the exhibit! 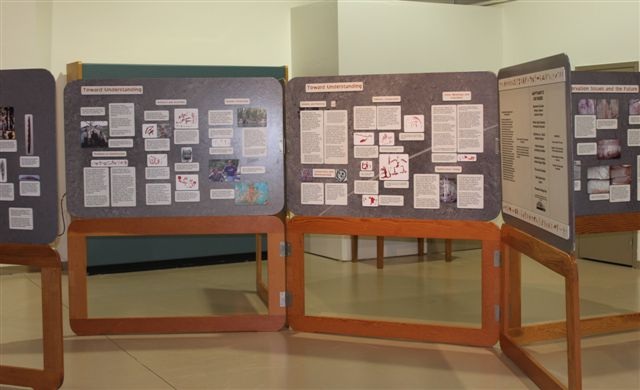 Our exhibit fees are $175/month or $60/week. Transportation charges apply.

If you are interested in booking the exhibit through your museum, school, library, or other facility please contact the SAS!